Vic, Anna and Andre would like to welcome you to stay at their Bed and Breakfast and find yourself a “home away from home”. Here at Desert Hills Bed and Breakfast we invite travelers from all over the world to come share in this relaxing atmosphere.

Vic, who speaks Italian, English and Spanish, was born in Bari, Italy and grew up in the rich European culture. His adventurous personality called him away from home to explore other cities and countries, while his gypsy heart lead him from work in Italy, to Africa and then to Bahamas, where he met Anna and then moved to the United States in 2000. Together they lived in Salt Lake City before finding their true passion and home in Moab at Desert Hills Bed and Breakfast. Since then they have hosted thousands of guests from all over the world and they look forward to hosting YOU!

Anna, a native Utahan was born and raised in Salt Lake City, grew up with an adventurous family who loved to explore the outdoors all over the United States. She graduated from Westminster College and met Vic in the Bahamas while on a cruise. And now together they have found a life that fits their personalities, background while still appealing to their adventurous lifestyles.

Our Bed and Breakfast Experience:

We purchased the B&B in February 2008 from Winni & John (Belgium couple) and continued their legacy by upholding their reputation of presenting good clean comfortable accommodations with a personal touch. We continue to expand and modernize our B&B to create a more home like experience for each of our guests.

Andre, our son (born in 2007) loves to welcome the families traveling with small children, he is happy to share a great child safe and friendly playground area. He has also taught us how to design the perfect itinerary for families traveling with young children. We love the opportunity to help customize each guests vacation by maximizing what they can see in the time they have available in this area. 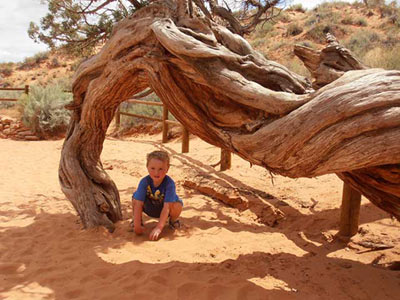 We are here to guide you on your trips into the unique untamed beauty of Utah’s Canyonlands region and to introduce you to Moab’s wonderful restaurants and shops.

In the evening feel free to come back and enjoy the calm and peaceful surroundings of our B&B, sit down and enjoying our backyard. We love to hear your stories and share a glass of wine with our guests.